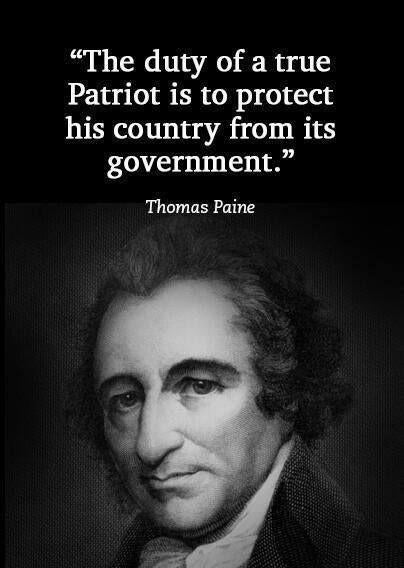 Duty of a Patriot is to Protect It's Citizens from Government

Stories continue to mount up regarding public corruption in Alabama.  The Lee County District Attorney, Brandon Hughes, has been indicted by a Grand Jury for ethics violations and is facing perjury and theft charges.  The Lee County District Attorney was well known for his harsh stance on those who were alleged to have committed crimes in Lee County.  In fact, Hughes was recently names prosecutor of the year by a "Victim's Advocacy," group who advocate for harsher sentences for those who have committed crimes.  Please see the story of the the district attorney, from Lee County who has never pitied anyone but himself, and has been accused of serious crimes.  I suspect he will not be such a stickler for harsh penalties any more.  To be fair, everyone is innocent until proven guilty in Alabama and everyone deserves a fair trail in front of a jury of their peers.  But this is just another example of people in power using their positions for personal gain while putting their boots on the throats of the hard working people of Alabama. I am very pro law enforcement, but I am also harder on law enforcement who abuse their positions and trust.  There are many support staff and Assistant District Attorneys in Lee County and across the State of Alabama.  In fact, I have personally worked with the Lee County ADAs on previous cases and find them to be friendly, cooperative and very professional.  They are fine lawyers and have always treated me and my clients accordingly.  I have never dealt with Mr. Hughes.  It's sad that this DA has chosen to embarrass the people of the county, and the Office of District Attorney, in this fashion.  It also demonstrates I hope, that everyone can mistakes, and some mistakes should not define a life and maybe harsh sentences are not the way to best serve society or eliminate crime.

The DA has been charge with five counts of violating state's ethics laws for using his office for personal gain.  He hire three children illegally to work in his office.  He has been charged with first-degree perjury for lying to a Grand Jury.  Hughes has been charged with conspiracy to commit theft.  The conspiracy to commit theft charge is a class C Felony which carries a possible penalty of one year to ten years in prison and a fine up to $15,000 dollars.  The First Degree Perjury charge is also a Class C Felony.  The five ethics violations charges are all Class B Felonies punishable by two to twenty years in prison for each charge and a fine of up to $30,000 for each count.  Thus, District Attorney Hughes is facing a possible prison sentence of 110 years in prison and fines over $165,000 dollars.  In reality, it is doubtful Mr. Hughes will actually serve any time in prison because his experienced criminal defense lawyers will be able to reduce his charges.

In yet another case of public corruption in Alabama, former Limestone District Judge Doug Patterson has plead guilty to three counts of felony abuse of power and theft.  Alabama Attorney General Steve Marshall said that, Patterson's actions as an attorney and a judge tarnished and debased the Judicial System of Alabama. Patterson used his office to defraud and steal from vulnerable people and showed a blatant disregard for the law.  Patterson has plead guilty to stealing over $73,000 dollars from the juvenile court fund he ran as a district judge in Limestone County and from his former clients when he worked as a private attorney.  Patterson paid his bills, spent money in restaurants, and lived the high life while stealing from juveniles and his former clients.  He plead guilty to stealing over $47,000 dollars from an incapacitated veteran living in a nursing home. Amazingly enough, Patterson stayed on the state payroll until July of 2020 making over $100,000 a year after being indicted and charged with an ethical complaint in 2019.  Patterson even admitted to this conduct in a letter to the presiding judge in Limestone County.

Patterson is now looking forward to being sentenced to a possible forty years in prison.  Patterson will be sentenced on December 8, 2020 this year at his sentencing hearing.  I never want people to spend time in jail, but this reprehensible conduct deserves significant jail time.  The harm done to the public trust must be taken into account.  Again, he is very unlikely to be sentenced to anything near 40 years in prison.  He might serve two.  Any criminal defense attorney worth their salt can probably significantly reduce his sentence with mitigating factors during sentencing.

What Are Sentencing Factors in Alabama

Here is a great link to everything you need to know about Alabama Sentencing Factors. Needless to say, it is a long list of tables and charts with mitigating and sentencing enhancing attributes.  Some criminal sentences are mandated by Statute or impose minimum sentences for a particular crime.  Different sentences may be imposed for felonies, misdemeanors and violations.  Felonies carry longer sentences and depending upon the severity of the crime charges can face anywhere from a year to life in prison.  Misdemeanors usually can only face up to a year in prison, unless you have a significant history of other crimes that can increase your sentencing range.  Alabama Judges use the Alabama Sentencing Guidelines as a means to help eliminate disparate treatment of crimes and sentencing in Alabama.

Class A Felonies for instance, such as Rape in the 1st Degree or First Degree Burglary, are all subject to a sentencing range of 10 years to 99 years to life in prison for each charge.  Charges are increased if you have a previous felony in the past.  For instance, a Class B Felony may become a Class A Felony if you have a previous felony on your criminal record.  Class B Felonies such a rape in the 2nd degree, auto theft or 2nd degree assault, are subject to the Class B sentencing range of two years to twenty years in prison.  A Class C Felony as mentioned, is a possible range of punishment of one year to ten years in prison, subject to any previous criminal record that could change that Class C felony into a Class B Felony or even a Class A.  So you could have a Class C Felony with only a possible sentence of ten years go to possibility of life under the wrong circumstances.

Factors that may be considered in Alabama Criminal Sentencing:

Your Criminal Lawyer Matters In Sentencing

Sentencing is a very crucial aspect to any criminal matter in Alabama or any State or Federal Court.  Your attorney's experience and how they approach sentencing can make a huge difference in the possible penalty you may face for a criminal conviction.  Even if you were were caught leaving the bank with a bag full of stolen money, the lawyer you hire to represent you during sentencing is extremely important.   An attorney who is experienced and familiar with the judges and prosecutors can reduce your sentenced significantly.  Please call me, Erik Fine, your local Alabama Criminal Lawyer for any questions regarding the complex law of sentencing.  I am here to help and will guide you throughout the process personally.